Surge is now available for VCVRack v1.0 as a collection of modules which break the Surge block diagram into individual modules. This manual describes those modules, but assumes that you are familiar with Rack and also that you have some basic familiarity with Surge. If that is not the case you may want to consider downloading the Surge VST and reading the Surge VST manual in conjunction with exploring these modules.

Much as surge-rack is beta, so is this manual. It is intended to at least provide a rudimentary overview. If you are interested in contributing to the surge-rack project but are not a developer, we would welcome work and improvement on this document.

Surge is an unabashedly digital synth, and VCVRack is an obviously analog-inspired environment. Bridging these two worlds creates a collection of fascinating musical opportunities, but also brings some choices in how we introduce the surge modules to Rack. In order to make the Rack experience coherent, we have worked to use common design and behavior patterns through all the modules. This overview section describes them. 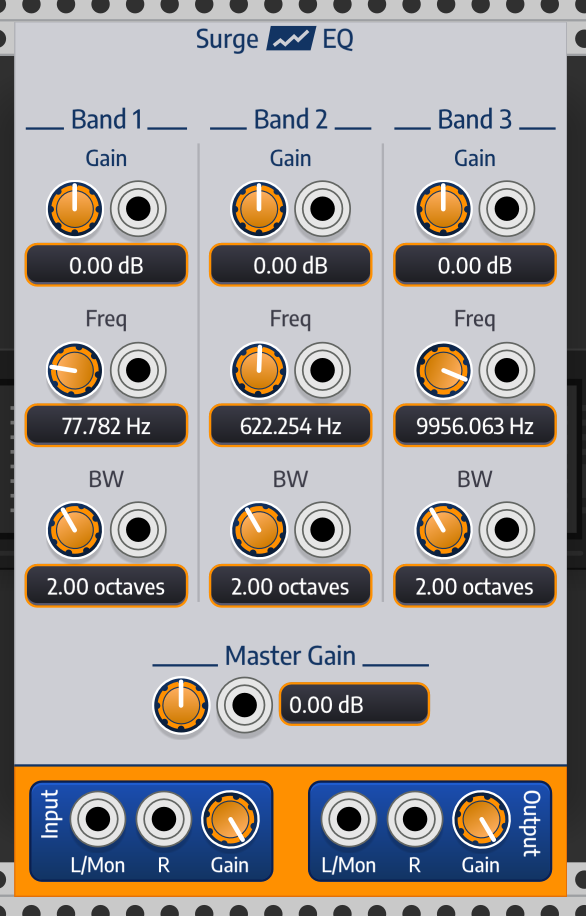 This module displays many of the common elements we see in a surge module. At the top of the module is the Surge Logo and the name of the module. At the bottom, in the orange region, is an input and output section, and in the middle are a set of effects with the ability to change base values and modulate the value with a CV input.

Surge is a stereo synth at its core, so each of the inputs and outputs are paired with a “L/Mon” and “R” input and a gain control.

For surge parameters, we typically have three components. A knob which centers the value, a CV input which modulates it, and a display which shows the center value but not the modulations. Modulating the CV input will not update the label but will update the value. Modulations expect a +/-5v CV input. 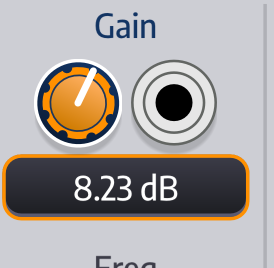 Almost all of the parameters are bound to a custom Rack parameter renderer, so you can enter in natural units with a right mouse edit.

Surge is a digital synth aimed at VST environments. As such it calculates its output in blocks of 32 samples. This has an important impact on the implementation in rack. For instance:

There are some exceptions to this rule. The Wave-Shaper processes in blocks of 4 samples. The biquad filter processes the input on a sample by sample basis but only reads parameters every 8 samples. And there are other exceptions. But you may need to account for this block size in your rack network design.

Surge overcomes these modulation issues internally by co-evaluating all of its modulation sources in a step, which is why a Surge Voice can have FM synthesis and so on. If you want to use these features of the surge engine, for now you are best served with the SurgePatchPlayer module. As surge-rack continues, we will add more “compound” modules which allow expanded interaction inside a block.

Almost all time parameters in Surge can work in an absolute (frequency in Hz) or tempo-sync (fractions of a 1/4 mote for a current BPM). To have a concept of BPM, though, Surge needs a clock input. We use the Rack standard CV for setting BPM, namely bpm = 60 * pow(2.0, cv). You can input a CV level using that semantic into surge modules which support tempo-sync and then toggle tempo-sync.

The visual indicators we use for tempo-sync are shown by these two images from the LFO module:

The small orange switch next to a parameter indicates that it is available for Tempo-Sync. When toggled the display will change to a fraction of a quarter note (and for larger displays will include the current BPM rate from the clock). In these images, the “CLK CV” input is where you would route the CV input to set BPM.

Many rack parameters - especially in effects and envelopes - can tempo-sync. It’s fun - you should try it!

SurgeOSC has 5 waveform generators, chosen through the toggle buttons at the top. It has a base pitch set either in notes or frequency (toggle the ‘f/n’) and modulated by a polyphonic CV, and has a collection of parameters. The parameter types and meanings change per oscillator as described in the Surge manual.

Unison Count is a special property which ignores the control voltage input for a technical reason. 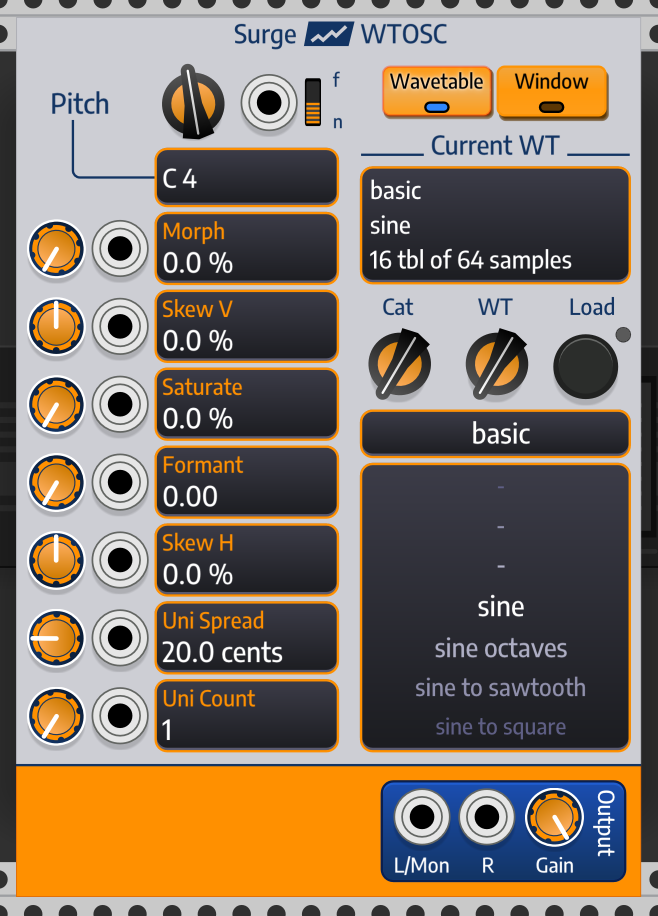 SurgeWTOSC is the surge interpolating wavetable oscillator. It has two interpolation modes, them WaveTable mode, which simulates early d/a converters outputting pre-set waveforms, and a Window mode, which uses a collection of more prosaic interpolation methods. It also ships with more than 300 wavetables.

The primary control in WTOSC which is missing in OSC is the wavetable selection. Wavetables in surge are broken into categories, toggled by the “cat” spinner, and each category has a collection of wavetables chosen by the “wt” spinner. Browsing wavetables does not change the oscillator; when you are ready to load a wavetable, press the “load” button. The red light being active by the “load” button indicates that you are viewing a wavetable different than the one you are playing.

If you have created custom .wt files in ~/Documents/Surge (or your OS appropriate place, as per the Surge manual) the SurgeWTOSC module will make them available to you. 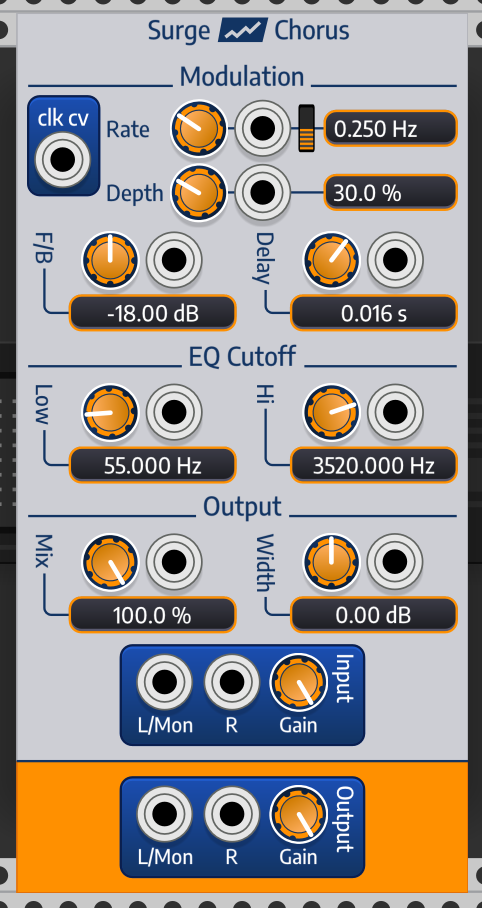 and ones with generic face plates where the parameters are shown as a simple labeled list, like their Stereo Delay shown here 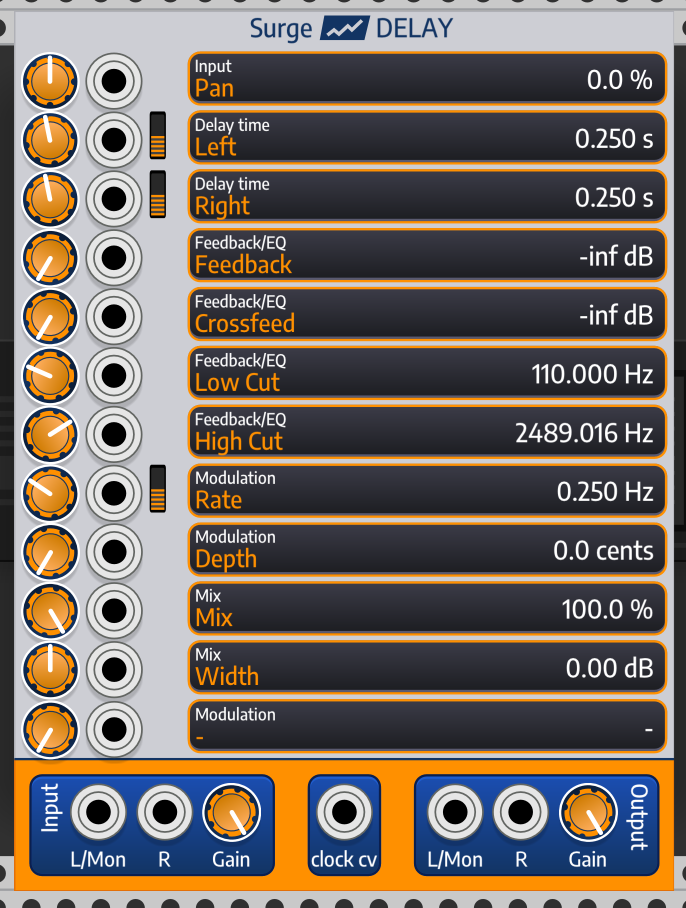 You can see that common UI elements, like tempo-sync switches and clocks, carry over, but the designed face plates are more logically grouped into parameters.

The SurgeVOC effect is special in that it has two input channels, a carrier and modulator. 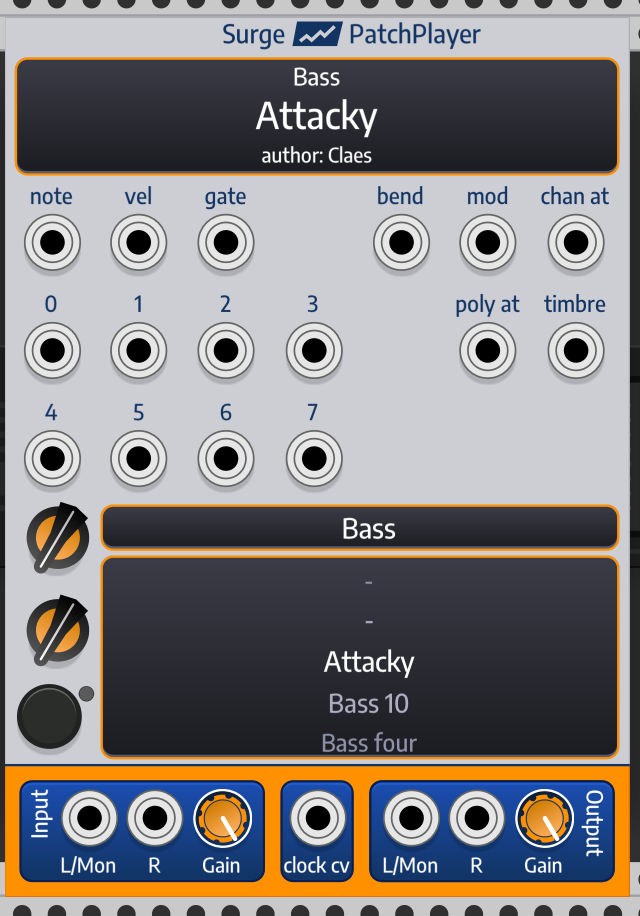 SurgePatchPlayer plays a surge patch with the full blown surge synthesizer loaded. The notes played are triggered by the polyphonic Gate input (which acts as a note on note off trigger), capturing the note and velocity at the time of trigger, using 1v/oct standard for note. The other controls surge reads from standard midi are exposed as CV.

Surge has a rich collection of interlocking filters and filter banks. As of 1.beta1.0, only the most primitive single biquad unit is available as the SurgeBiQuad unit, which supports multiple filter types.

Surge LFO is a polyphonic LFO. It has two modes. If not gated, it outputs a single free running LFO controlled by the top section of the control panel. If gated (mono- or poly-phonically) it outputs a collection of enveloped LFOs, following the DAHDSR envelope shown in the lower section. If gated, there is one unique LFO and envelope for each degree of gate polyphony. All items can support tempo-sync to a clock. 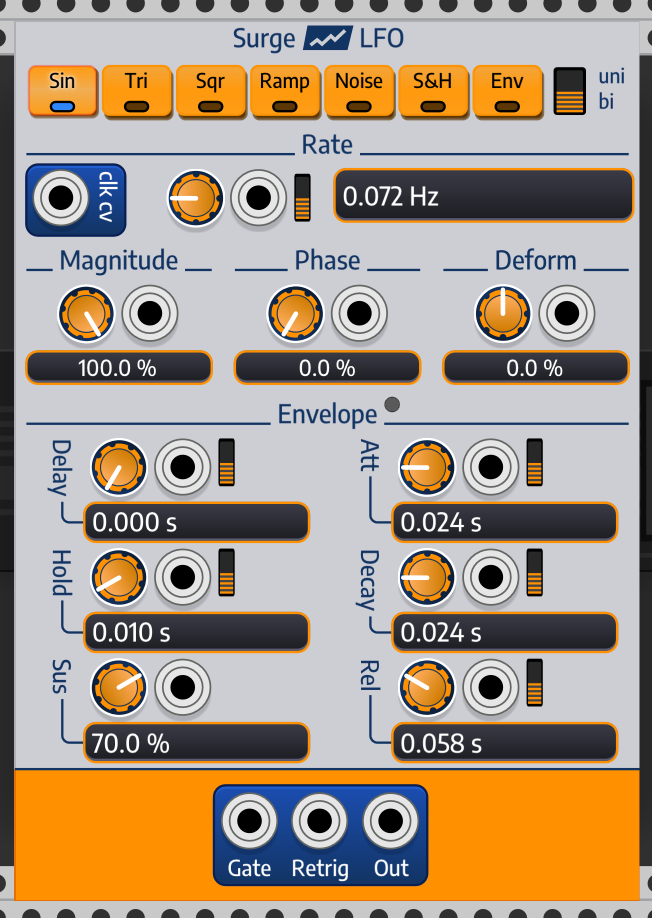 The Surge ADSR is a polyphonic ADSR envelop generator with multiple modes and tempo-sync. Polyphony is driven by the gate input.

The Surge Wave Shaper is a collection of wave shaping algorithms to add warmth and distortion to incoming signals.

The SurgeClock is a tiny utility clock which outputs gates and CV at a given BPM set by a control.

Surge Noise is the noise generator which appears in the Surge Mixer in the VST.